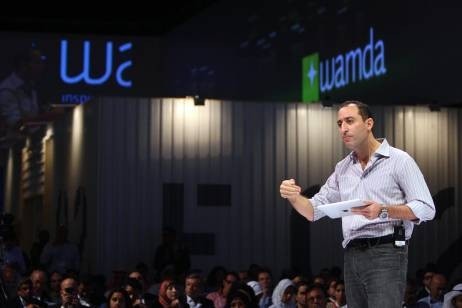 Abraaj Capital spent a few hundred thousand dollars on a website it hopes will help entrepreneurs across the Gulf make millions.

Wamda, which means “spark”, was unveiled by the private equity giant yesterday. It is aimed at mentoring new ventures and creating a platform for angel investment in the region.

“To date, there is no single pan-regional movement, online or offline, dedicated to regional entrepreneurship. Wamda is an essential component of filling that void,” said Arif Naqvi, the chief executive of Abraaj Capital.

More than one third of the region’s 370 million people are under the age of 30. Economists have pointed at entrepreneurship as a way to create jobs for 50 million people over the next 10 years.

“We can reach all the pillars in the Arab world, we can support all the entrepreneurs with the right information with best practices, mentorship and investing,” said Samih Toukan, the director of Jabbar Internet Group and a founder of Maktoob.

“I know that there’s a lot of initiatives happening in this region but it’s a maze. Wamda is the only thing I have seen that is so comprehensive.”

Abraaj Capital also announced a “strategic alliance” with Endeavor, a global non-profit organisation that provides networking and business training programs for start-up ventures in return for a 1 per cent equity stake in the company.

Although details between the two companies have yet to be formalised, it is understood that Abraaj Capital will assist Endeavor in setting up a regional office in Dubai by the first quarter of next year.

“The Middle East is joining this community of emerging markets that in some way is leap-frogging some of the developed world,” said Linda Rottenberg, the co-founder and chief executive of Endeavor.

“The infrastructure’s better, the talent’s hungrier and in some ways I’m more excited about the region here than I am in the US.”

Meanwhile, the Jordan-based Oasis-500 incubation fund announced its first investment in the first five companies that “graduated” from its entrepreneurship boot camp programme.

About US$15,000 (Dh55,087) was invested in a number of technology, digital media and mobile start-ups, said Usama Fayyad, the executive chairman of the fund and a former chief data officer at Yahoo.

The fund was established this past summer as a way to help kick-start more than 500 internet businesses over the next five years.

“No other venture capitalist in the region would do this kind of thing,” Mr Fayyad said.

“Basically, the training started on September 25 and one month later, we had our five companies, did the due diligence and they have received their cash. What’s noticeable and unique about this is the speed in which we’re investing”.