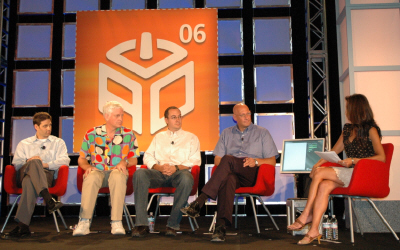 Three of the search engine kings (Microsoft was missing) held court during an AlwaysOn Stanford Summit this afternoon, discussing the state of search technology. Bambi Francisco of Marketwatch led the conversation with (from right below) Usama Fayyad, Chief Data Officer at Yahoo; Jim Lanzone.

Three of the search engine kings (Microsoft was missing) held court during an AlwaysOn Stanford Summit this afternoon, discussing the state of search technology. Bambi Francisco of Marketwatch led the conversation with (from right below) Usama Fayyad, Chief Data Officer at Yahoo; Jim Lanzone. CEO of Ask.com; Peter Norvig, engineering search and quality director at Google; and Michael Yavonditte, CEO of Quigo.

Fayyad was quick to offer that Yahoo’s data indicates that the “notion of a portal is still extremely relevant,” clearly in contrast to the more search-focused Google or Ask. “Usage of the new Yahoo front page completely supports that,” Fayyad said. “The data is telling us that search is not enough.” He also mentioned that Yahoo’s data also showed that simply having a news preview box in the Yahoo email client greatly increased user retention long term.

Lanzone shared Ask’s perspective on search, starting with the premise most users are lazy searchers, and won’t apply tags or use categories, such as images. “Users will iterate on a search engine,” Lanzone said.  Users will type in a query search of  a few words, scan the page in five seconds or less, find a clue and then iteratively continue search, four or five per session, Lanzone said. Part of Ask’s interface is suggesting searches that help speed up getting to the right result through an interative process.

Google’s Norvig (at left) talked about efforts in linguistics and language understanding to deliver search experiences, pointing to Google’s machine translation system that translates Arabic and Chinese to and from English. The world class software was built using statistical models, without anyone on the team knowing Arabic or Chinese, Norvig said. In another example, Norvig said a million birthdates were gathered, starting from a list of ten, by gathering examples of how facts are expressed, such as specific words, a name with parentheses after it or one of the twelve months. “It can be done because data is available that wasn’t before.”

Another area search area Google is pursuing is a speech interface, especially for mobile devices like cell phones. “It’s like talking to a live person in library,” Norvig said. “It’s not just a few keywords, you need to have a way to have a dialog.”  On the desktop, Norvig questioned whether speech would be more natural than typing. “It’s more up to Microsoft and Apple and how they ‘design the operating systems.”

Fayyad said that independent speech recognition is not accurate enough to work for humans and is still far off, but the technology can be applied to highly verticalized areas today.

Fayyad then went on a rant that the search interface today is broken. “It is still the early days of search and we are not onto the right metaphor or product for search.,” he said. He gave an example of configuring a query in Yahoo Autos as a step in the right direction. “Once you have context, you have a lot more knowlege about users than typing in more search queries,” he added. Lanzone countered that the interative approach saves time, and Norvig said you have to know more about the users. All three are right.

Fayyad also promoted Yahoo’s social search efforts, such as Yahoo Answers, Flickr and Del.ico.us, as a differentiator from competitors. “We are learning about different segments,” Fayyad said. Each one has different search habit. You have to understand the customers and have different products for each segment.

Lanzone (at left) doesn’t believe that vertical search is going to replace the  mega-search engine. “It’s easier to use the white box, and type in a few words. In terms of all the different vertical options, you are not going to go to 26 Web sites to to 26 types of searches,” he said.

Norvig noted that vertical search, such as Google Finance, requires a different user interface than regular search. On the subject of social networking and search, Norvig said that Google has had some success with Orkut in Brazil specifically, but that it was hard to explain what makes a service, such as Wikipedia, successful. “Is it luck of the draw or getting the first few people? We really don’t know.”

Then the conversation turned to the money tree–ad serving. Yavonditte’s company serves ads, competing the big search engines. “We try to infer why you are on page and what your current behavior is, and  then look at hundreds of thousands of ads, and in near real-time figure our which add to serve. Over time we are getting closer to one-to-one marketing,” he said.

Relevancy is the best approach to delivery ads, Yavonditte said, but it can be  counter-intuitive. The day and time can have an impact, as well as the aesthetics. “Every pixel matters,” Yavonditte said. “When you study the science behind serving ads, you see what kind of variations in performance by changing fonts or background colors.”

Yahoo is mostly focused on behavioral targeting for relevance, Fayyad (at right) said.

search, because it’s the early days, just because you can do it doesn’t mean that you should, so we are all trying to figure out the search marketplace, but we have to be careful not to over-monetize or ruin the ads.”  He brought up the need to go beyond the typical search ads that show up on results pages. “To do marketing properly, you have to do it globally and think about frequency to have huge influence when get to the search stage,” Fayyad said. He trumpeted the Yahoo portal value again.  “With email, news, finance, you have opportunities to repeat the message,” he said, citing a brand advertising study that showed a 120 percent to 250 percent lift in clicks on sponsored ads if the user saw a brand advertisement within a week.

“We  focus on the moment when you do the search and we are  branching out to other areas, such as radio,” Norvig said.

The searchers were asked about the wildest data points they have seen. Lanzone said his favorite search query is “How can I tell if I am pregnant,” which is in the top 20 searches on Ask every day.  Norvig said that one night he was looking through query logs and wondered how many sequence of queries from users come in the form of a haiku. He found three from one user. The first two were about Java and the third, “Playboy FAQ.” “It’s a real story of search, frustration and release,” he quipped. Yavonditte chipping in that “pink fuzzy dice” led to the best ROI at eBay Motors. Fayyad said he continued to be amazed at the capacity of human beings to spell words in so many
different ways.