As they discussed the region’s hottest trends in light of recent uprisings, here’s what they covered.

“Mobile is the most social technology the internet ever seen,” Keith Teare of TechCrunch pointed out. The biggest opportunity, says Teare, will be going global by building mobile software.

It’s certainly growing quickly worldwide: 80% of the world will have mobile phones by 2020. Currently, 4.2 billion users send messages on their mobiles through SMS, Whatsapp, iMessage and other mobile messaging apps, far more than the number of users messaging through Facebook, emails and other social media platforms.

In the Middle East, where smartphone penetration reaches 62% in the UAE and 60% in Saudi Arabia, some of the highest rates in the world, it’s set to become, as Teare said, “an app world, not a web world.”

Throughout the forum, from an opening address by Fadi Ghandour of Aramex to a later panel, e-commerce was a hot topic. The facts and numbers told the story quite bluntly:

In a nutshell, e-commerce is growing, especially in the Gulf, but credit card penetration needs to catch up to fully enable the sector. Challenges around government taxing, customs and e-payment remain, but many are looking to Paypal’s recent strategic move and expansion in the region to help the sector overcome some basic challenges, including customer trust.

The Cloud and Big Data

“There is a third wave in tech, a smarter planet, where you will see big data, cloud, commerce and mobile taking precedence,” said Tarek Saeed, the Senior Client Technical Advisor at IBM, during the panel Big Data, Mobility and Cloud.

“It’s already happening with technologies like Watson,” he said, referring to IBM’s artificial intelligence computer system that answers direct questions posed in natural language. Saeed illustrated how cognitive systems such as Watson, which heavily rely on big data, data mining and cloud computing technologies, will massively transform how organizations will target customers in the future and make informed decisions.

Bashar Kilani, IBM’s Territory Manager, also mentioned that they are trying to introduce Watson and its cognitive technology to the Middle East market – exciting news for tech entrepreneurs in the region.

Taking an entrepreneur’s perspective, Usama Fayyad of Oasis500 advised aspiring startup founders to focus on these sectors as opportunities and hunt for a segment that they enjoy, whether big data, cloud computing, e-commerce, social networks, or even Arabic online content. Become an expert in it, further build on it, innovate and you’ll become a player both regionally and globally, he advised.

Games and Gamification: The Next Best Thing

Despite a few recent startup closures, gaming is continuing to be a dominant sector in Jordan, especially with Sony planning to launchtwo gaming academies this month.

Moderated by Mohannad Ebwini of Gate2Play, the session on Games and Gamification brought together Nour Khrais of Mayslward, Iyad Ahmad of GamesXP and Mahmoud Khasawneh of Quirkat. With online gaming seeing 50% growth last year, these Middle East players confessed they are looking to compete internationally.

It was clear that mobile is the future for online gaming in the Middle East. With 20 billion gaming app downloads in 2012, and 53 billion downloads expected in 2013 worldwide, mobile is an increasingly easy way to reach a large userbase. While we haven’t seen a game come out of the Middle East to become a top global hit, that day is coming.

Challenges remain; competition is high, the market is fast-paced and gaming companies need to scale quickly, despite not finding enough talent in the job market. While most game development studios in the region simply train their own developers, they also suggested that universities and educational institutions should consider teaching gaming courses to students to meet the market’s demands.

Invest in ICT, and Moving beyond the Cliff

A great addition to this year’s MENA ICT Forum was the Invest in ICT session, which matched 30 tech entrepreneurs with major regional investors and advisors for one-on-one meetings.

Fadi Ghandour set its energy in motion at the start of the day, calling on investors to not just give capital but also spend time and build close relationships with entrepreneurs. In one Q&A session, investors agreed that tech entrepreneurs would meet with more success finding investment if they became more business savvy, focusing not just on technology but also on market viability.

Startups, in the meantime, pointed to the challenge of the finance “cliff,” or the absence of post-seed capital that they find when they need to scale (although vehicles like Wamda Capital are growing). The hope is that building relationships through events like Invest in ICT will help alleviate the problem.

Putting the Focus on Scaling

To keep the focus on supporting scaling startups, the AllWorld Network and Int@j announced a partnership to showcase the region’s fast growing ICT entrepreneurs at the next MENA ICT Forum, 2015.  Winners will be ranked based on their sales growth, and will receive worldwide recognition, helping them grow further and become better known to customers and investors. If you’re an entrepreneur and interested to apply, check out AllWorld’s website.

In short, the ICT Forum offered the region a look back at the accomplishments of the past years, and called for pioneering tech startups in the Arab world to play big on megatrends. Most of what was said has been said before and will be said again, but hopefully as events like these work to actually match entrepreneurs with mentors, and laud startups for scaling quickly, entrepreneurs will see tangible value within the soundbites. 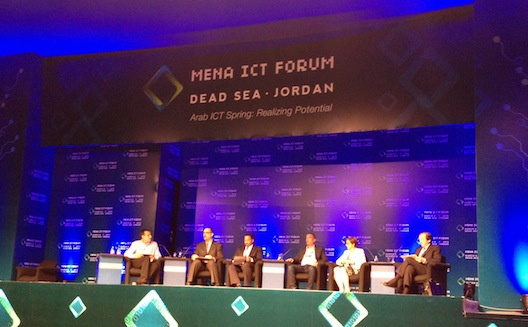