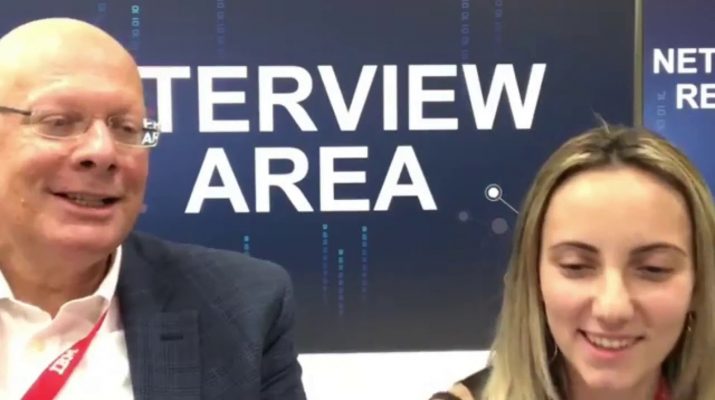 Usama Fayyad was the keynote speaker at ODSC Boston 2019 and talked about the IADSS (Initiative for Analytics and Data Science Standards – www.iadss.org) research; findings into analytics market, insight from research participants and the next steps of the research.

Just after the speech, we were there to make a Live Broadcast on LinkedIn with him and talk about IADSS. Here is the interview transcript, but you may watch the broadcast record on IADSS YouTube channel, as well. (Please subscribe to IADSS channel to stay up to date with the research, and interviews with leaders from data science world.)

Kate Strachnyi: We are at the Open Data Science Conference, ODSC East in Boston with Dr. Usama Fayyad. Dear Usama, you had a keynote speech this morning about IADSS Research, can you sum up what you talked about and some key points?

Usama Fayyad: Yeah. The keynote was really focused on sharing some of the research results we found out through the IADSS, the Initiative for Analytics and Data Science Standards. I started out with a picture of Captain Sully (Landed his plane in the Hudson River off Manhattan after both engines were disabled by a bird strike in 2009; all 155 people aboard survived), and I said, “Would you rather be flying with this guy or,” and I added some images of some really bad pilots.

Usama Fayyad: Well, you have to look at the slides that I shared. (Laughing). Then I basically said the same thing in the medical profession. You know, “Would you rather have a surgeon with a good reputation or,” and I had stories about kind of surgery gone wrong and some of the bad practices. Then here is the fundamental question: How bad do you think things would get if you had the wrong people, who claim to understand data science, do the analysis and often missing out huge value that could be available in the data for the organization or even worse, leading the organization in the wrong direction because they reach the wrong conclusions by doing the wrong analysis? I think that’s way underappreciated in the analytics and data science field. The biggest economic problem we hope to address, both as a service to the field but also as a service to companies and organizations working in the field is imagine now a space where you have huge shortages of talent.

There are some amazing studies that talk about the difference between the number of job openings in data science and the number of available data scientists that could fulfill those jobs. We talked about McKinsey predicting in 2011 that by 2018, there’ll be a 140,000 to 190,000 job openings that cannot be fulfilled. What’s amazing is LinkedIn runs its independent study … or we think it’s independent of that … saying how many jobs in data science are not fulfilled, and they come very close to 150,000. So that’s the shortage. IBM is predicting that, by 2020 there’ll be 2.7 million data science and analytics jobs out there with similar kind of gaps in supply-demand.

So here’s the question: You have all these gaps, you’re trying to hire for your organization. You’ve got all these candidates, most of whom are not qualified, who are actually applying and submitting their resume and saying, “Hey, I’m a data scientist; hire me.” What do you do as an organization? Most organizations’ HR departments don’t understand data science, their managers don’t understand it, so they actually end up spending a lot of time interviewing. We had quotes from a lot of industry leaders, one of whom basically said, “Look, I had a 60–1 ratio, between interviewing or looking at 60 people before I actually was able to hire one, and I was lucky to hire one.”

Usama Fayyad: This person was actually complaining that it was too high. But imagine this now. 60 interviews! And many of them take a whole day, with a lot of people from the organization. We did some basic math and we came across a number that’s we’re trying to now verify and publish it officially, hundreds of millions of dollars spent only on wasted interviews. Imagine that’s the wasted interviews space.

Kate Strachnyi: The madness. How do we move away from that?

Usama Fayyad: Well how do we move away from that? So you asked me what we talked about. The talk started out with examples of how the rule is so varied that within the same company, and we used Facebook as a company, three different people who call themselves data scientist, you look at their LinkedIn profiles, completely different backgrounds, completely different education, and completely different emphasis. Then of course, we compared jobs in data science and analytics across different companies, and there the variance is even much larger. Then we looked at both the supply and the demand. The people, how they talk about themselves when they claim they are data scientists. Again, you see a huge variance which is very confusing to employers. We looked at the supply side, which is who’s training these guys, the universities. We actually compared several programs, both undergraduate and graduate curricula. They also almost had nothing in common. The confusion is just growing bigger and deeper, and we think the fix and our mission is to basically define these roles and have even sub-roles. So if everybody likes to call themselves data scientist, great, we’ll have data scientist Type A, Type B, Type C, Type D. Because often an organization is trying to hire a data scientist for digging through the data and dealing with big data systems. Another one wants to hire somebody who’s an interface to the business. A third one wants to have really someone what I would call an algorithm’s jockey who really knows the machine learning algorithm and how to use them etc.. So there’s a huge variance and we need to address that variance.

Kate Strachnyi: I’m also part of the advisory board of IADSS and maybe we can spend some time talking about that. What can we expect to hear from IADSS over the next few months, what are some long-term goals, and maybe let’s just start with why did you decide to co-found this?

Usama Fayyad: Yeah, so first of all, thank you for serving on our advisory board, we’re proud to have you. Second of all, we started it really out of frustration and I think my co-founder Hamit Hamutcu, out of spending many years working in analytics and realizing “Oh my God, there are people who are doing analytics who shouldn’t be doing analytics, there are people who don’t understand it, who are suffering, they can’t find what they need, they can’t express what they need!”.

So for us, the vision is ubiquity of these standards that we hope to develop with the community. What we define by standards, we address what is a role, how do you define the role; how do you define the requirements to basically qualify for that role; and how do you make that ubiquitous with everybody, so reachable, acceptable to everyone, where everybody can start looking at it and speak a new language where it is really distinguishing and avoiding a lot of the inefficiencies. That’s number one.

Number two is setting the standards for how do you qualify for that role, what kind of assessments you administer to make sure that candidates know these skills. Just saying that somebody should know machine learning isn’t enough. Depending on the job, what parts of machine learning should you test on, and which aspects, and what kinds of algorithms etc., as an example. Same with analytics, same with visualization, same with a lot of these roles.

Defining those three areas and making that ubiquitous where it’s easily accessible, easily applied … by the way, we think it’s totally doable, it just needs enough energy around it and enough people who are interested in serving the field to sort of say, “Well, this makes sense, we should adopt it,” and people adopt it because the need is there, both for educators, for employers, and for candidates.

Kate Strachnyi: So you said you started this research out of frustration, so why exactly do we need standards? Why can’t we all just be data scientists and be happy?

Usama Fayyad: (Laughing) Well, because there are many other jobs that need to be fulfilled. We don’t need to all be data scientists. It is a great job, it is a great career, but also, to be a data scientist, much like being a pilot or being a surgeon or a doctor, you really need to know what you’re doing, and we, or society needs to know that they can trust that you know what you’re doing so that you’re allowed to kind of do good or do damage, in a limited way. As opposed to kind of an open field where anybody can do anything and everyone knows what’s good, what’s bad, what’s a good hire, what’s a bad hire, how much should I pay etc., All that stuff is very hard to compare if you don’t have these standards. These standards are absolutely essential to make it a more rational process, to guide the educators on what to teach for what role, and to guide the employers on what to look for in each role.

IMAGE 5: What will Standards Provide to the Industry?

Kate Strachnyi: Got it. So I know you’d been doing a lot of research and surveys and interviews. Can you give us a sense of how many surveys or interviews have you completed so far?

Usama Fayyad: Yeah, so far we’ve had over 700 survey participants and I would encourage everybody tuning in to take the survey, because that helps us. We’ve had about 700 people from hundreds of companies. One of the surprises to me was the majority of these companies were large companies. I really thought a lot of startups, a lot of freelancers would be taking the survey but now what we’re finding is a lot of managers, a lot of people in kind of well-defined roles in big companies are interested in taking it because they’re curious. They actually face this problem, as their HR department doesn’t know how to hire or they’re not getting support or recruiters are trying to charge them a lot of money, or candidates are demanding too much.

Kate Strachnyi: Thank you so much for joining me on this LinkedIn live stream all the way from Boston at the ODSC conference.

Usama Fayyad: Thank you, Kate. Thanks for having me here.

Engage with and Contribute to the IADSS Research!

If you are an executive or professional in analytics, data science or BI space, please join the research and help us collectively define standards by clicking here.

This article was originally published on https://www.iadss.org/blog.