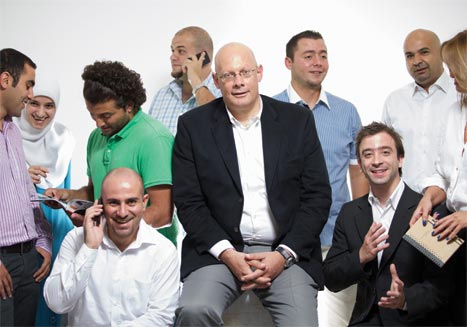 Jordan’s ambitions to become a regional technology hub have just been given a much-needed shot in the arm.

Oasis 500-the country’s most active entrepreneur incubator-has seen two of its first batch of web-based start-ups clinch local and international investment deals worth millions. But best of all, Oasis 500 promises there are many more exciting companies like them in the pipeline.

ICT guru Usama Fayyad has probably been involved in countless exciting projects during his long and varied career working for the likes of NASA and Yahoo!. So when he gets animated about the caliber of Jordanian technology start-ups he’s helping to nurture as the executive chairman of Oasis 500, it’s probably a good idea for the rest of us to sit up and pay attention. “From what I have seen in Jordan these last eight months, I can truly say we have struck something more valuable than oil, more valuable than gold,” he told Venture.

Oasis 500 was only launched last autumn, but it already seems to be well on track to achieving its ambitious goal of funding and accelerating 500 companies over five years. In May, it announced that two start-ups from its early intake rounds had secured major financing deals with domestic and international investors – no doubt impressed with how this far-from-conventional incubator manages to significantly boost the valuations and revenues of the young companies that take part in its accelerated 100-day training program.

The Kawar Group, along with businessman Emad Malhas, also chose to invest in Wheels Express, a web-based delivery company that was founded by Ibrahim Manna’ and a group of childhood friends in 2009. The size of the deal wasn’t declared, but Manna’ said the sum could be considered a “good number” for a local start up.

Al-Khatib intends to use his investment to improve MarkaVIP’s sourcing and logistics, and to boost its staff and client numbers. He said he’s grateful for everything the Oasis 500 program has done for him. “Oasis 500 has been a fantastic networking platform. We met business leaders from Jordan and the Middle East, policy makers, as well as investors,” he said. “In addition, we benefited from exchanging ideas with other fellow Oasis 500 entrepreneurs, as many of the challenges we all face are similar.”

This praise was echoed by Manna’, who hopes to use his new funding to grow his company into one of Amman’s top delivery companies. “The whole company is grateful to Oasis 500,” he said. “It was a very successful partnership. We’ve been offered training courses, mentorship, funding and the opportunity to pitch in front of angel investors.”

One of those angel investors was Karim Kawar, President of the Kawar Group, as well as an entrepreneur and Oasis 500 mentor alongside other highly experienced business figures like Aramex’s Fadi Ghandour and Zain’s Abdul Malik al-Jaber.

Kawar said both al-Khatib and Manna’ really shone during the program’s thorough selection and training process. “When they were presented to us, both of them stood out,” he said. “When you’re looking at such early stage (business development), the idea is important, but more importantly, you’re investing in the individuals behind the company. And in both cases, those young entrepreneurs were very promising in that they have given their operations ample thought…and it seems they were on a great trajectory.”

MarkaVIP and Wheels Express were among six companies that passed through the Oasis 500 program and were presented to a group of local and international investors at a special two-week event held in Amman in May. MarkaVIP and Wheels Express pitched successfully and won investments, while Oasis 500 said the remaining firms are all currently in negotiations with potential investors.

The initial aim of the program was to only finance and accelerate ten companies in the first year of operation. But Fayyad said the standard of candidates and their ideas had been so high that around 20 firms have successfully passed through the scheme in its first eight months, and a further ten would likely be added to the list before year-end.

All Oasis 500 entrepreneurs pass through the program’s unfussy headquarters located in Amman’s sprawling King Hussein Business Park. Many of them hardly fit the profile of what many would imagine to be the “typical” entrepreneur. For example, during a tour of the site, Venture met Lisa Kawar, a 37-year-old former housewife who’s developed a bilingual price comparison website called Menwayn.com.

As well as training, Oasis 500 start-ups receive an initial injection of JD 10,000 in seed capital from the program’s own investment fund, for which Oasis 500 gets 10 percent ownership of the firm in return. Fayyad said his team expects around 20 percent of all its entrepreneurs to secure follow-on funding. Of those, half will receive this funding from the Oasis 500’s own angel investor network. This means Fayyad expects some 50 companies to secure funding at around the $150,000 to $500,000 mark during the lifetime of the Oasis 500 project.

MarkaVIP and Wheels Express may be proof that local and foreign investors are starting to show a real interest in the program’s companies. This could have a lot to do with how well these firms perform in the market after they pass through the program. Over a four-month period, Fayyad said the Oasis 500 scheme is able to boost the valuation of the companies it invests in by a factor of three to seven times.

“This shows that early-stage investment indeed does represent a huge premium and a chance for the fast growth of capital,” Fayyad said, adding that Oasis 500 has also helped triple the revenue of some companies in the space of just three months.

So how does Oasis 500 manage to produce such impressive results? Fayyad said the program is truly unique in a number of ways. “We have developed unique training, mentorship and pitching/acceleration strategies and programs that no one else, in the whole world, has. We are currently being studied by many international entities to understand how we achieved all this. This includes the IFC/World Bank, the US State Department, and many other VC’s in the region and outside,” he said.

Manna’ of Wheels Express said he can attest to the high quality of guidance he was given during the Oasis 500 program. “The training has given me tools to improve my business significantly, in order to think and manage the right way, not in the way we used to, which was close to trial and error,” he said.

Oasis 500 also has an intensive and fast-paced boot camp that entrepreneurs are thrown into when they first embark on the program.

“This Boot Camp not only allows us to filter ideas, but more importantly, people, teams and their commitment to the business,” Fayyad explained.

Then there’s the not-insignificant matter of Oasis 500 having its own angel investment network and a dedicated investment fund, which allows the people running the program to make quick, on-the-hoof decisions about if and when to pump capital into one of the promising business ideas presented to them.

The duration of the program is another vitally important factor to consider – the course itself is done and dusted in a mere 100 days. This sits in marked contrast to other established incubators, which start-ups can remain tied to for months, if not years.

“Most incubators in the region appear to be long-term incubators. We target a 100-day incubation, but we do not think of it as incubation. It is indeed acceleration writ large,” Fayyad said.

But with all this talk of boot camps and being “accelerated,” the last thing Fayyad wants is for less experienced entrepreneurs to feel too intimidated to contact the program. “Our philosophy at Oasis 500 is that we never reject or say no to an entrepreneur. If we do not fund a business, we always ask the entrepreneur or team to come back with a revised plan or to fix certain aspects of the idea or plan,” he said.

Even if an entrepreneur‘s idea doesn’t perform quite as hoped, Kawar believes it’s not the end of the world, but rather the experience should be embraced and learnt from. “We realize that some companies will fail,” he explained. “What we want to do is make sure that they fail fast, at least so that those entrepreneurs can go on to other ideas. At Oasis 500, we celebrate failure. We believe that it’s a crucial part of the learning and maturity process.”

At its current rate, the program should easily reach—and maybe even surpass—its target of nurturing 500 start ups over half a decade. But Fayyad accepts there are challenges which will have to be overcome.

A major concern will likely be raising enough funds to power the program onwards. Fayyad said Oasis 500 has yet to completely raise its first fund of $6 million – a sum that’s supposed to see the program through its first two years.

“We luckily raised about half of it quickly, and this enabled us to start without delay. It is still a tough environment to raise funding,” he said, and conceded that finding money will be a lot tougher beyond the two-year mark, when the program will need to find more than $20 million to stay on plan.

But the fact that Oasis 500 has achieved so much in such a short space of time suggests financing shouldn’t be an insurmountable issue. The program, backed by heaps of goodwill from Jordan’s business community, appears to have generated such impressive momentum that it would be unwise to bet against it achieving its ultimate goal of funding and accelerating 500 start ups over the next half-decade or so. Clearly, this would be a remarkable achievement that could potentially have a huge impact on the Kingdom’s economic health and set a shining example for the rest of the region to follow.

“An effort that develops entrepreneurship and builds new companies is something that not only Jordan needs, but the entire region needs,” Fayyad said. “The Arab World needs to figure out how to create 100 Million new jobs, real new jobs, in the next 20 years. How can this be done without generating a large number of private companies that can service the world as a market?”