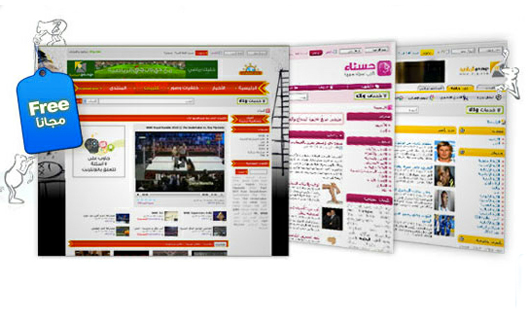 At that stage, the three content portals were hosting 75% of Arabic content, the Oxford Business Group reports. While most of that user-generated content, at least on Jeeran, tended to come from Egypt and Saudi Arabia, it was still hosted in Jordan, speaking to the platforms’ ability to facilitate expression in Arabic online.

As Maktoob continues to tailor its content to the region with Yahoo!’s acquisition of a license for Yamli’s technology, d1g and Jeeran have shifted into new avenues over the past year, no longer competing for the UGC space in quite the same way.

Jeeran has pivoted into a new, hyperlocal location review site, complemented by an iPhone application and a newly-launched Android app.

d1g’s shift, which began in mid-2011, is into the social network space; rather than offering users an individual blog as their “diwan” or gathering space on the internet, the site has refocused so that “diwans” are now customized communities that users can build on a theme of their choice.

Rather than focus on building one big user-generated content portal, as it had since its launch in 2007, “our vision has evolved to be more focused on giving users the tools that they need to create their own content portals,” says CEO Majied Qasem. Not long after the refocusing, the portal secured funding from Abraaj Capital in September 2011, following an initial round of funding in 2009 by investors that included Usama Fayyad of Oasis500.

The central point of differentiation is that the community is social media agnostic; it’s designed to bring together Facebook, Twitter, and eventually Google+ users (once Google opens the Google+ API) with non-social media users, onto one central platform that’s also integrated with a mobile application.

“Two-thirds of our customers don’t have a Facebook account, and the penetration varies by region. On d1g, we are trying to give publishers as well as advertisers a tool to bridge the gap between these different communities,” says Majied Qasem. The site is so far most popular in Saudi Arabia, where Alexa estimates that around 36% of its traffic originates. Egypt comes in second, and Morocco, the UAE, and Jordan following, he says.

Since its launch of the new community function last July, users have launched 1900 communities on d1g, says Qasem. The site now sees 5.4 million unique users and 35 million pageviews a month.

The new function is clearly a work in progress. While a Sony-exclusive Android app launched last month that offers users with Sony phones the ability to access and monitor their communities, a new Android app and iOS version that will allow users to post directly to their communities are slated for the summer.

In their current private beta phase, the communities are also not fully integrated with Twitter and Facebook, but Facebook integration can be activated by direct request. Today, only about 5% of d1g community users have activated this function; it will be public around July 30th, says Qasem.

As internet use becomes more local, social, and mobile, d1g’s shift makes sense; individual blogs are dying as social media satisfies the urge to micro-blog. Although d1g is integrating with existing social media, the question remains as to why users would need a fully aggregated platform if a Facebook Page serves the same function and offers a global userbase as well as Arabic integration.

Qasem points to the idea that d1g is augmenting the Facebook experience by offering extras through its Facebook application. “We give you a Facebook application that plugs into your Facebook page,” he explains, “from which you can augment your page with video uploads and downloads, competitions. This is also integrated with our mobile application.”

The other differentiating factor is the ability to create an individualized mobile app for your community, with its own brand, through which you can post content. These will launch in October, he says, offering users a specialized way to connect across social media platforms.

WIth so many elements, it’s hard to see at the outset how d1g’s communities will ultimately be used. Will users mostly implement diwan functions to augment their Facebook pages? Or will they mostly use d1g’s custom mobile apps to plug directly into their own community, circumventing the need to post on it via Twitter? Or will the d1g mobile app itself become a second Hootsuite or Tweetdeck for your own community, allowing you to post across various social media?

The shift, which has not affected d1g’s classic Yahoo!-like interface, retains the concept that satisfying users means creating a monolithic portal (a concept that Wamda has also wrestled with in its iterations). As the new communities are not a response to user feedback, but rather designed based on user trends, it remains to be seen whether users already loyal to d1g are creating new communities where they used to create forums, or whether the platform is creating new value that will attract a broader userbase.

Yet if the idea succeeds and d1g can enact the entirety of its vision, it will provide a unique cross-platform avenue for Arabic content creation.

What do you see as the biggest value add of a social media-agnostic community?